The Penn Museum holds one of the most diverse collections of anthropological artifacts in the country, and has been sharing it with the public for over 130 years. This weekend, the museum opens its brand new Middle East Galleries, and celebrates with a weekend full of mid east centric activities for all ages. You can learn more, and plan your trip to Penn Museum here.

The renovated 6000 square foot gallery features more than 1,200 artifacts telling a 10,000 year history of humanities’ transition from nomadic and small village life to complex globally connected cities. Half of the artifacts in this gallery have never been on display to the public. This exhibits pair touch screens with traditional gallery cases, and allow visitors to learn the history of the artifact, and how it relates to the lives of the people who used it. 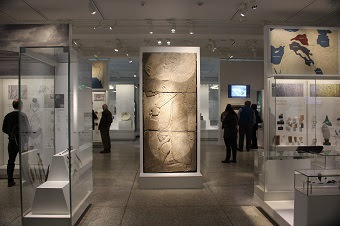 A team of 10 curators, with years of expertise studying Middle Eastern cultures worked together to develop this interactive gallery. A press release states that this is the beginning of a larger “Building Transformation” campaign aimed at enhancing the way visitors interpret the artifacts. The release says the campaign will be announced next Spring.

The artifacts in this exhibit belonged to people from all walks of ancient Middle Eastern life. Some of the earliest artifacts in the exhibit are a footprint in clay and hand tools used in farming from the area known as the “Fertile Crescent,” which is considered the birthplace of agriculture. The tools date back to 5400 BCE, and were excavated from the ruins of a house in the highlands of Iran. 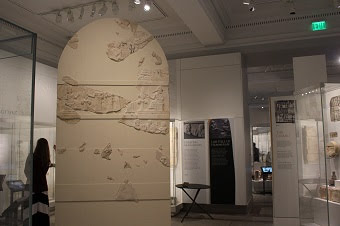 In another exhibit, artifacts found inside a warrior’s tomb are laid out in the manner they were found, on a platform made to resemble the warrior’s final resting place. Visitors can look in as if they are staring down in the grave, and get a sense of how the tomb was found.

Many artifacts come from the ruins of a two story house known as the “White Building” in ancient Mesopotamia. The house was burned down in a battle around 4400 BCE, and artifacts giving a glimpse into life before cities were preserved in the ruins. Visitors can view cooking pots, spindle whorls for weaving and a child’s rattle.

Some of the first cities were in this region, and many artifacts come from the ancient city of Ur. This ancient urban center was one of the first to have a city government, legal system, suburbs, and nearly 20,000 inhabitants. 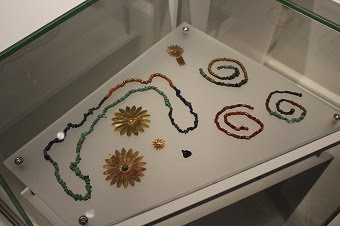 Visitors can view the highly ornate crowning jewelry of Queen Puabi, an ancient ruler of Ur. She was buried along with 74 other people, some decorated with jewelry, and other artifacts.The exhibit includes the Queen’s cape made of gold and silver as well as bowls, cups, and jars from the queen’s funerary feast, and other artifacts found at the burial site.

While this is a brand new gallery, the artifacts were procured over nearly a century of archaeological excavations in the Middle East, focusing on early cities and settlements in what are now Iraq and Iran, and rethinking how the pieces were interpreted by archaeologists.

GoPhillyGo was fortunate enough to speak to exhibit curator Dr. Holly Pittman who gave us a personal tour of some of the artifacts before delivering some remarks during a brief program. According to here, one piece of jewelry in Queen Puabi’s collection was put together upside down. After study and reconsideration, the piece was put back together the way it was intended, and became much more stunning.

Dr. Pittman hopes the public will be once again take interest in these objects. “The world renowned art and artifacts unearthed there in the 20s and 30s, in a joint Penn Museum and British Museum really astonished the world,” Dr. Pittman said. “These royal tombs produced treasures that forever changed our understanding of the society of mesopotamian culture a long time ago.” 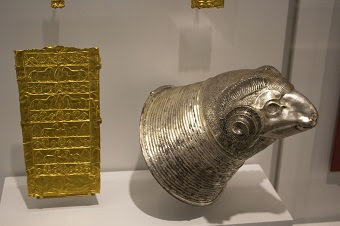 Dr. Pittman sees parallels between cities today and cities in the ancient world. Society has grown technologically, however Dr. Pittman and her colleagues hope to show that these people were not much different than us.

“Through these galleries, we are trying to tell the story of humanity, of people that were not so different than you and me,” Dr. Pittman said. “They faced the same sorts of problems that any culture that is urban in its foundations faced.”