You can find about 2000 butterflies and 80 different species of arthropods all living on Frankford Ave in Holmesburg.

Philadelphia has a world class museum district highlighting art, science and natural history along the Ben Franklin Parkway. Unfortunately, there aren’t many institutions outside of that area that are easily accessible to communities away from Center City. The Insectarium and Butterfly Pavilion in the Holmesburg section of Philadelphia, is serving a community that simply doesn't have access to science related learning centers, but has lots of people who want to learn.

“I think Northeast Philadelphia is an underserved community for a lot of the natural sciences,” said Dr. John Cambridge, CEO of Philadelphia Insectarium and Butterfly Pavilion. “We feel it’s very important to invest in this area specifically, so we’re growing a lot of partnerships.”

Dr. Cambridge and his company Plan A began renovations to the Insectarium and construction of the Butterfly Pavilion in August 2016. He opened to the public last February, and continues to give children and adults real hands on time with some interesting insects from around the world. “Our specialty is to open up the cages,” Dr. Cambridge said.

According to Dr. Cambridge, the Insectarium is housed in one of the oldest buildings in Northeast Philadelphia. Over the years, the building was used as an auto body shop, carpet store, landscaper, firehouse, pool hall, pesticide company and an American Legion Post.

In the early 1990’s a company named Steve’s Bug Off occupied the space, and had an interesting idea to help get more customers. Dr. Cambridge says in 1992, the company opened the Insectarium Institute as a marketing ploy to get people to stop in. He described it as an oddities museum, with one locally notorious exhibit titled the cockroach kitchen where cockroaches roamed freely along a sink and countertops.

Dr. Cambridge says the overall theme of the exhibits was that bugs are bad.

Dr. Cambridge decided to build his vision with a completely new focus.

“Insects are an incredibly important part of our ecosystem,” Dr. Cambridge said. “Come and explore these diverse and beautiful creatures.” The 7000 square foot butterfly pavilion is home to about 2000 butterflies that make up 60 to 70 different species. Visitors can also explore 80 different species of arthropods inside the Insectarium.

Dr. Cambridge believes in giving a unique experience to every visitor, and says the Insectarium will create a tour based around you or your group’s needs. He says many students from city schools come there on class trips, so he and his team designed tours that are age oriented, and coincide with Next Generation Science Standards that are applied in classrooms across Philadelphia.

Building strong ties to the community is a major priority for Dr. Cambridge and his team. “It’s extremely community oriented. We open the facility up for a lot of safe events,” Dr. Cambridge said. “This is a place for kids to learn, and to make sure they are staying out of unsafe behaviors after school.”

Dr. Cambridge believes there is sometimes a disconnect between ecological stewardship and community stewardship. He says that many times, one is sacrificed for the other. Dr. Cambridge hopes the Insectarium and Butterfly Pavilion can be a place where both are practiced together.

“There’s often times a disconnect between ecological stewardship and community stewardship,” Dr. Cambridge said. “We really want this to be a place where those two worlds meet.”

This Week in the Watershed July 4th - 10th 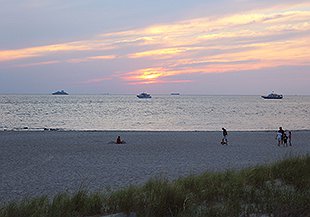 Ditch the Car, and Let GoPhillyGo help you enjoy fun by the water this Summer.

Enoy free boating, creek studies, and trips to the Jersey Shore this summer without the hassle of high gas prices and traffic. Plan a sustainable trip to fun water activities with GoPhillyGo. 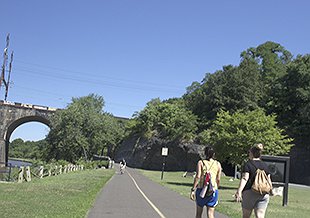 Parks on Tap is at a key location for you to enjoy some trail time, and GoPhillyGo can show you how to make the most of your visit with easy directions to nearby destinations and points of interest.